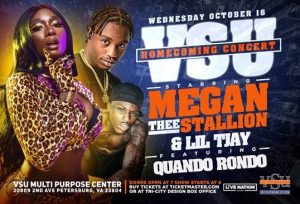 Tickets go sale to the general public on Friday, September 6 at 10am. Tickets can be purchased exclusively online at Ticketmaster.com and at the Tri-City Designs Box Office at the VSU Multi-Purpose Center. Tickets start at $29.

Megan Thee Stallion, born February 15, 1995, is a female rap artist from Houston, Texas. The seductive femcee is a full-time college student, as well as a choreographed dancer and model. Under her mother’s management company, Pretty Time Entertainment Management, the Texas native first began to gain notoriety after meeting super producer TA and releasing her first single “Like a Stallion” in April 2016. After dropping a number  of hot verses on a few Texas Cyphers , her verse on ‘The Houston Cypher’ over Drakes 4pm in Calabasas caught on like wildfire , and placed her as a top trending topic in Houston on Twitter. From there her online following took off. Soon after, she released her mixtape ‘Rich Ratchet’ on Soundcloud and MyMixtapez, and then her first EP “Make It Hot” soon followed.

In February 2018, Megan linked with a Houston legend, T. Farris, which led to her signing to 1501 Certified, a record label owned by retired baseball player, Carl Crawford. Her highly anticipated project ‘Tina Snow’ was released June 10 2018, and debuted at #11 on iTunes Hip.-Hop charts.  The rap siren is certainly a new force to be recognized and reckoned with. The H-Town Hottie is from the dirty south, but she has a vendetta for the top.

Lil Tjay, is an American rapper, singer and songwriter from the Bronx, New York. He is best known for his collaboration with Polo G, “Pop Out”, peaking at 11 on the Billboard Hot 100 as well as “Resume” and “Brothers”, with the latter receiving 44.4 million plays on SoundCloud, which led to his signing with Columbia Records. It has also been a staple on SoundCloud’s Top 50 chart.

Quando Rondo, is an American rapper and singer from Savannah, Georgia who is currently signed to the Atlantic Records imprint, Never Broke Again, LLC. He initially gained attention with the release of his song “I Remember” featuring Lil Baby in January 2018. He has since released three mixtapes, Life B4 Fame (2018), Life After Fame (2018), and From the Neighborhood to the Stage (2019). His song “Motivation” was featured on the popular YouTube channel World Star Hip Hop.