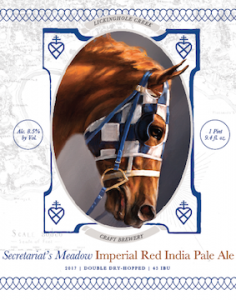 Produced by Lickinghole Creek Craft Brewery of Goochland County, the limited-edition beer has been named Secretariat’s Meadow, in honor of Meadow Stable where the great champion was born and raised. The beer will be previewed during a special event called Barn Appetit, a farm-to-fork dinner showcasing local foods and beverages on March 24. Guests can lift a glass along with members of the Secretariat racing team, who will be on hand for many of the weekend festivities.
Secretariat’s Meadow is an Imperial Red India Pale Ale with a color reminiscent of the champion’s rich chestnut coat and his nickname, “Big Red.” It will be the first in a series of Secretariat beers produced by Lickinghole Creek; the three remaining beers will be released individually during 2017.
“The Secretariat beer is not only an important addition to our offerings at the brewery, but it also brings my family’s horse racing legacy full circle,” said Lisa Pumphrey, co-founder of Lickinghole Creek. Her grandfather, David P. Reynolds, won the Preakness Stakes and Belmont Stakes in 1994 with Tabasco Cat, who was sired by Storm Cat, a grandson of Secretariat.

“Lickinghole’s modern-day tribute to Secretariat as a Virginia favorite son is an honor for my family and me,” said Penny Chenery, Secretariat’s owner. “The beer is a delightful way to celebrate The Meadow’s glory days but, more importantly, the area’s rich and storied agricultural heritage.”

Lickinghole Creek is named for the creek that meanders through the rolling hills of the 290-acre farm where the brewery grows hops and barley to produce its award-winning beers. The brewery has won honors at the World Beer Cup, Great American Beer Festival and the Virginia Craft Brewer’s Cup. Eight of Lickinghole Creek’s beers are listed on Beeradvocate magazine’s “Top Rated Beers of Virginia.” Their Great Commander Imperial Stout was just named RateBeer’s “Best Beer by Subregion” for 2016.

Special guests at the Barn Appetit event will include: Charlie Davis, Secretariat’s exercise rider; Otto Thorwarth, jockey and actor who portrayed jockey Ron Turcotte in the Disney film Secretariat; and Kate Chenery Tweedy, daughter of Penny Chenery. Tweedy and Leeanne Meadows Ladin, the Secretariat tourism manager at The Meadow, co-wrote the book Secretariat’s Meadow —The Land, The Family, The Legend.

The Barn Appetit series is a collaboration of The Meadow Event Park and chef Jason Alley of Pasture restaurant in Richmond. Each dinner will offer a unique thematic tasting experience along with a narrated tour of Secretariat’s birthplace, now a historic landmark. Proceeds from Barn Appetit will go toward restoration of the original 1930s barns where Secretariat was born and raised.
Tickets for the March 24 Barn Appetit are available at VirginiaHorseFestival.com.