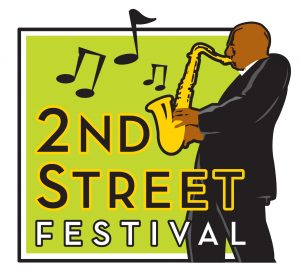 Over the years, the 2nd Street Festival has grown to be one of the Mid-Atlantic’s largest street festivals. Nearly 30,000 people visit historic Jackson Ward to reminisce about the days when 2nd Street was the heart and soul of Richmond’s African American community and was known as “the Harlem of the South.” The 2nd Street Festival features four stages of live entertainment along with a Kidz Zone, popular food vendors, a marketplace and Artists Row to shop, the Richmond Metropolitan Antique Car Club, and walking tours given by Historic Jackson Ward Association.

This year the festival features Saturday’s headliner EU (Experience Unlimited) and a Sunday performance by Richmond’s finest, Legacy Band. Many other great artists will be showcased over the two-day event.

EU (Experience Unlimited) is one of the original Washington, DC Go-Go bands. Fronted by founding member Gregory “Sugar Bear” Elliott, the original members all attended Ballou High School in Washington, DC. Their early regional hits included EU Freeze, Lock Your Butt, and Knock ‘Em Out Sugar Ray. Although they are best known for their Grammy nominated, massive worldwide hit DaButt from Spike Lee’s “School Daze” soundtrack, EU scored hits with Salt & Papa (Shake Your Thang), with rap innovator Kurtis Blow (Party Time), and on their own with Buck Wild and Taste of Your Love. Da Butt won Soul Train’s best R&B/Soul Single, Group in 1989. EU has performed with Teena Marie, Morris Day and The Time, Mint Condition, Cameo and countless others. They performed on a show with Bob Dylan in 1989, one of Sugar Bear’s career highlights. In 2003, EU performed to a national audience on the televised NAACP Awards’ Tribute to Spike Lee. EU has been featured in 2009 in VH1 one hit wonders of the 1980’s. EU is currently in the studio working on a new CD, and they continue to rock the stage night after night.