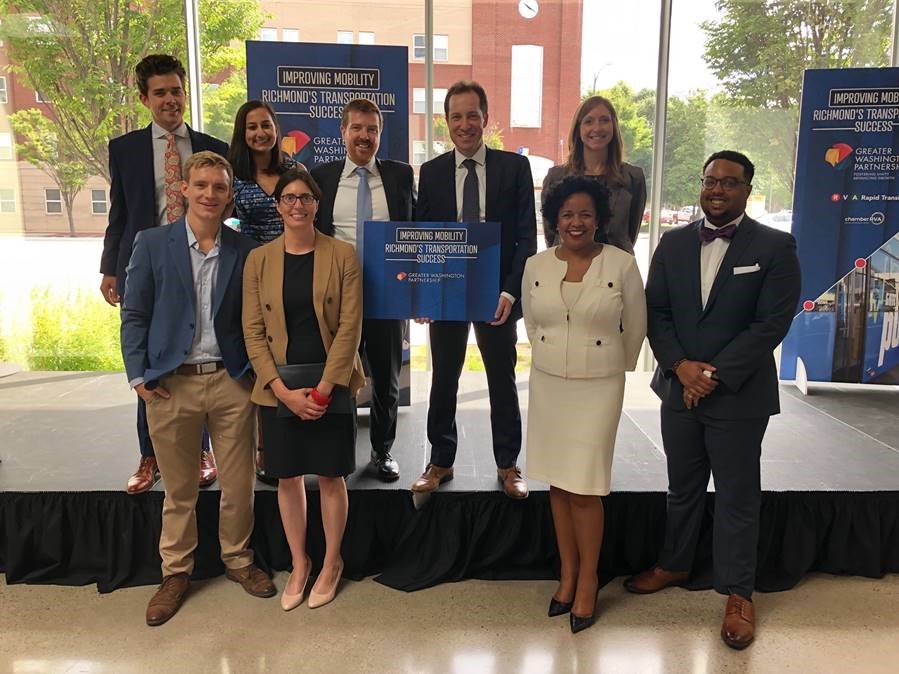 Richmond, Va.—Today, the Greater Washington Partnership released a new case study, entitled “Richmond’s Transit Revolution: GRTC Ridership and Accessibility Analysis” that analyzes the historic investments made in 2018 in the Richmond metro area that has transformed the area’s transit system into a national leader.

In 2018, the City of Richmond, Henrico County, Virginia, and the Greater Richmond Transit Company (GRTC) revolutionized its transit system with the launch of the Pulse Bus Rapid Transit (BRT) line, a bus redesign in the City of Richmond and historic expansion of service in Henrico County. These changes increased access to transit and jobs, and resulted in a 17 percent ridership increase from July 2018 to April 2019 compared to the previous year.

“Richmond’s transit improvements present a best in-class roadmap for peer regions nationwide,” said Jason Miller, CEO of the Greater Washington Partnership. “Richmond is on its way to becoming a transit leader, furthering enhancing the Capital Region’s ability to attract and retain top talent. We should all be proud.”

“The improved access to transit and jobs in Henrico Country and the City of Richmond will be a huge economic driver for the entire region,” said Thomas F. Farrell, II, Chairman, President and CEO of Richmond-based Dominion Energy and co-Chair of the Partnership’s Regional Mobility Initiative. “As Richmond grows as a national transit leader, it becomes an attractive destination in which to live and work, both improving the lives of its citizens and drawing commuters from other areas in the Capital Region and beyond.”

The Pulse BRT, the backbone of the new transit system and the premier BRT in the Capital Region of Baltimore, Washington and Richmond, connects Downtown Richmond to Henrico County with fast, frequent and reliable service. Today, the Pulse was awarded the Bronze Standard by the Institute for Development & Transportation Policy (ITDP), becoming 8th world-class BRT corridor in the United States.

“Richmond’s leap from incremental bus transit improvements to bold infrastructure investment took leadership,” said Michael Kodransky, U.S. Director, Institute for Transportation & Development Policy. “For years to come, daily riders and former car drivers will appreciate more frequent bus service. The Pulse’s 2.6 mile segregated segment is notable for connecting to downtown, a model for other cities pursuing similar projects. It is exceeding ridership projections and increasing access to jobs in the region along the entire 7+ mile route. We hope to see other cities pursue this kind of partnership to promote economic development, equity, and cleaner air.”

The case study was released at an event co-hosted by ChamberRVA and RVA Rapid Transit that brought together regional leaders to highlight Richmond’s transportation progress in the past year. Today’s event, moderated by John Robert Smith of Transportation for America, featured the award of the ITDP Bronze Ranking and a conversation with the Honorable Levar Stoney, Mayor of Richmond; Gary Armstrong, Chair of GRTC Board of Directors; and Jennifer Mitchell, Director of Virginia Department of Rail and Public Transportation. The event also featured remarks from Thomas F. Farrell, II, Chairman, President & CEO, Dominion Energy; Jason Miller, CEO of Greater Washington Partnership; and Dr. Michael Rao, President, Virginia Commonwealth University.

In November, the Greater Washington Partnership released the Blueprint for Regional Mobility, the first-ever CEO-driven strategic mobility plan for the entire Capital Region. Through Richmond’s bold action on transit in 2018, it has a head-start on its mobility goals as stated in the Blueprint: faster commutes, better options, and more access.

“I am thrilled the Pulse has been awarded a Bronze Standard by the ITDP,” said Mayor Levar Stoney. “This is a perfect example of what teamwork and collaboration between localities and the Commonwealth of Virginia can do. We will continue to collaborate on our regional transportation network and invest in equitable transportation—serving people in ALL neighborhoods—to improve the lives of our residents. I am excited for the future of this important partnership.”

“Henrico County is a proud partner in the Pulse and enhanced transit service for the region,” said Henrico Board of Supervisors Chairman and Varina District representative Tyrone E. Nelson. “The bold steps taken in 2018 are the result of careful planning to boost mobility and connectivity for our residents, workforce and businesses. We are pleased that riders have responded so favorably. More than ever, our region is on the move, with convenient, reliable access to jobs, critical services and destinations, including Richmond International Airport.”

“From vision, to planning, through construction and ultimately its success, DRPT is proud to have served with local, state, federal and community partners playing a leadership role in The Pulse,” said Jennifer Mitchell, Director of Virginia Department of Rail and Public Transportation. “The Richmond BRT project, as part of the larger community transformation, can serve as a world class model for the region and beyond.”

“In becoming a world-class city and region, we have to build a world-class transportation system that provides robust public transit, integrates on-demand transportation options, expands access for pedestrians and cyclists, and maintains safe roadways,” said Gary Armstrong, President/Chair of GRTC Board of Directors. “The implementation of the Pulse BRT is an incredible step forward for GRTC and our regional partners. Combined with the expanded service in the City and Henrico this year, the new service in Chesterfield and the new long-term contract with VCU, we are providing the best service for our residents and are making this vision a reality.”

“ChamberRVA is proud to play a part in this important case study and award—sharing and celebrating our region’s work on the transit system means we are truly moving forward in ensuring equal access to opportunity and in attracting and retaining talent,” said Kim Scheeler, President and CEO of ChamberRVA. “Success doesn’t happen in a vacuum, and it doesn’t happen overnight. We want to recognize the City of Richmond, Henrico County, and the State for their commitments, which have led to a tremendous increase in transit ridership within our region over the last year.”

“We’re so excited to see the Pulse recognized as one of America’s best Bus Rapid Transit lines,” said Ross Catrow, Executive Director, RVA Rapid Transit. “Over the past several years, RVA Rapid Transit has worked with the City of Richmond, Henrico County, the Department of Rail and Public Transportation, and hundreds of volunteers to help make the Pulse a success. The Richmond region continues to invest in public transportation, and we can’t wait to continue the work—kicked off by the Pulse—to build a frequent and far-reaching public transportation system for the entire Richmond region.”

For more information about the case study or the Greater Washington Partnership, contact Steven Chlapecka at skc@greaterwashingtonpartnership.com, or call 202.871.9914.

About the Greater Washington Partnership

The Greater Washington Partnership is a first-of-its-kind civic alliance of CEOs in the region, drawing from the leading employers and entrepreneurs committed to making the Capital Region—from Baltimore to Richmond—one of the world’s best places to live, work and build a business. Working in collaboration with leaders across our communities, the Partnership connects and leverages the region’s extraordinary assets to advance inclusive, actionable solutions that strengthen the Capital Region as a leading global region and center for commerce and innovation.